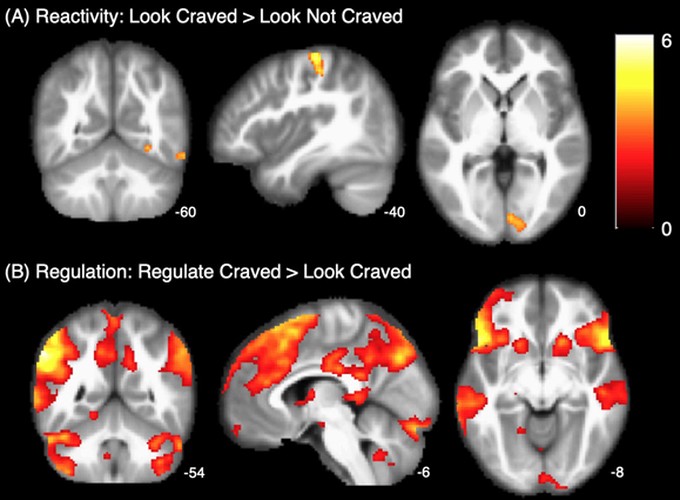 Neural patterns associated with viewing energy-dense foods can predict changes in eating-related outcomes. However, most research on this topic is limited to one follow-up time point, and single outcome measures. The present study seeks to add to that literature by employing a more refined assessment of food craving and consumption outcomes along with a more detailed neurobiological model of behavior change over several time points. Here, a community sample of 88 individuals (age: M = 39.17, SD = 3.47; baseline BMI: M = 31.5, SD = 3.9, range 24–42) with higher body mass index (BMI) performed a food craving reactivity and regulation task while undergoing functional magnetic resonance imaging. At that time—and 1, 3, and 6 months later—participants reported craving for and consumption of healthy and unhealthy foods via the Food Craving Inventory (FCI) and ASA24 (N at 6 months = 52–55 depending on the measure). A priori hypotheses that brain activity associated with both viewing and regulating personally desired unhealthy, energy-dense foods would be associated with self-reported craving for and consumption of unhealthy foods at baseline were not supported by the data. Instead, regression models controlling for age, sex, and BMI demonstrated that brain activity across several regions measured while individuals were regulating their desires for unhealthy food was associated with the self-reported craving for and consumption of healthy food. The hypothesis that vmPFC activity would predict patterns of healthier eating was also not supported. Instead, linear mixed models controlling for baseline age and sex, as well as changes in BMI, revealed that more regulation-related activity in the dlPFC, dACC, IFG, and vmPFC at baseline predicted decreases in the craving for and consumption of healthy foods over the course of 6 months.