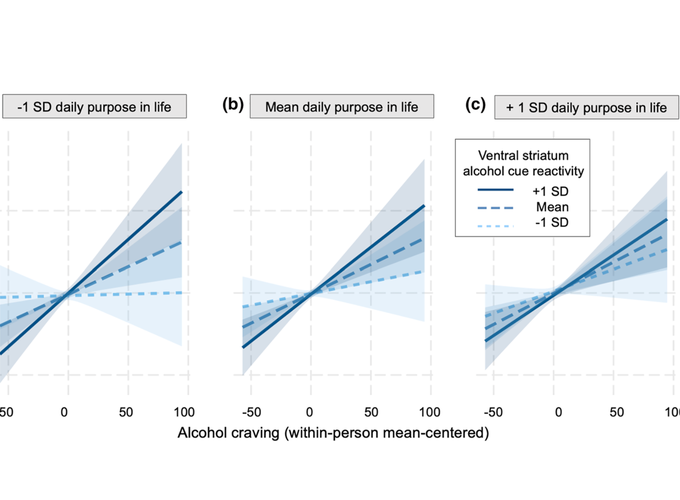 Background and Aim: Alcohol craving is an urge to consume alcohol that commonly precedes drinking. However, craving does not lead to drinking for all people under all circumstances. The current study examined neural reactivity to alcohol cues as a risk, and purpose in daily life as a protective factor that may influence the link between alcohol craving and the subsequent amount of consumption.

Measurements: Participants underwent fMRI while viewing images of alcohol; we examined activity within the ventral striatum, a key region of interest implicated in reward and craving. Participants then completed 28 days of EMA and answered questions about daily levels of purpose in life and alcohol use, including how much they craved and consumed alcohol.

Findings: A significant three-way interaction indicated that greater alcohol cue reactivity within the ventral striatum was associated with heavier alcohol use following craving in daily life only when people were previously feeling a lower than usual sense of purpose. By contrast, individuals with heightened neural alcohol cue reactivity drank less in response to craving if they were feeling a stronger than their usual sense of purpose in the preceding moments (binteraction=-0.086, p<.001, 95% confidence interval=-0.137, -0.035).