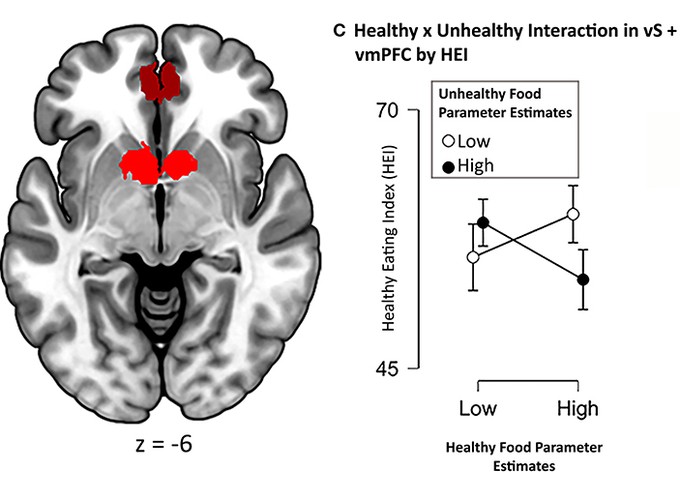 Considerable evidence points to a link between body mass index (BMI), eating behavior, and the brain’s reward system. However, much of this research focuses on food cue reactivity without examining the subjective valuation process as a potential mechanism driving individual differences in BMI and eating behavior. The current pre-registered study (https://osf.io/n4c95/) examined the relationship between BMI, healthy eating, and subjective valuation of healthy and unhealthy foods in a community sample of individuals with higher BMI who intended to eat more healthily. Particularly, we examined: (1) alterations in neurocognitive measures of subjective valuation related to BMI and healthy eating; (2) differences in the neurocognitive valuation for healthy and unhealthy foods and their relation to BMI and healthy eating; (3) and whether we could conceptually replicate prior findings demonstrating differences in neural reactivity to palatable vs. plain foods. To this end, we scanned 105 participants with BMIs ranging from 23 to 42 using fMRI during a willingness-to-pay task that quantifies trial-by-trial valuation of 30 healthy and 30 unhealthy food items. We measured out of lab eating behavior via the Automated Self-Administered 24 H Dietary Assessment Tool, which allowed us to calculate a Healthy Eating Index (HEI). We found that our sample exhibited robust, positive linear relationships between self-reported value and neural responses in regions previously implicated in studies of subjective value, suggesting an intact valuation system. However, we found no relationship between valuation and BMI nor HEI, with Bayes Factor indicating moderate evidence for a null relationship. Separating the food types revealed that healthy eating, as measured by the HEI, was inversely related to subjective valuation of unhealthy foods. Imaging data further revealed a stronger linkage between valuation of healthy (compared to unhealthy) foods and corresponding response in the ventromedial prefrontal cortex (vmPFC), and that the interaction between healthy and unhealthy food valuation in this region is related to HEI. Finally, our results did not replicate reactivity differences demonstrated in prior work, likely due to differences in the mapping between food healthiness and palatability. Together, our findings point to disruptions in the valuation of unhealthy foods in the vmPFC as a potential mechanism influencing healthy eating.