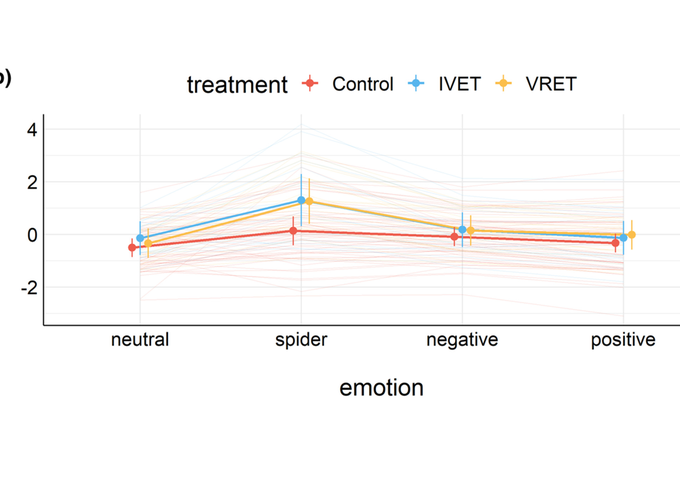 Specific phobia can be treated successfully with exposure therapy. Although exposure therapy has strong effects on self-reported ratings and behavioral avoidance, effects on measures derived from electroencephalography (EEG) are scant and unclear. To fill this gap, spider-phobic individuals received either in-vivo or virtual reality exposure treatment. Patients were tested twice (one week before and after treatment), and control subjects once. In each session, EEG was recorded to spider pictures as well as other positive, negative, and neutral pictures. During EEG recording, participants performed a simple detection task while task-irrelevant pictures were shown in the background. The task was used to reduce potential confounding effects from shifts of attention. After the task, subjects were shown the pictures again and rated each in terms of their emotional reaction (arousal and pleasantness). The results showed that before treatment, patients rated spiders as more negative than did control subjects. Patients also showed elevated early posterior negativity (EPN) and late positive potential (LPP) to spiders. After treatment, the negative emotional ratings of spiders were substantially reduced. Critically, Bayesian analyses suggested that EPN and LPP were unaffected by treatment and that the treatment groups did not differ in their responses (EPN, LPP, and ratings). These findings suggest that the effects of in vivo and virtual reality exposure therapy are similar and that the initial stages of motivated attention (EPN and LPP) are unaffected by treatment.